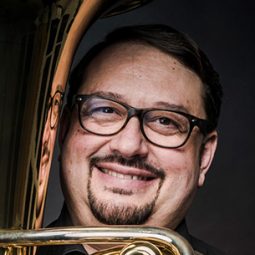 Pablo Fernández is the Principal Tuba of the Barcelona Symphony Orchestra (OBC) since 1994, Professor of Tuba, Euphonium, Specific Instrumental Repertoire and Chamber Music at the Superior School of Music of Catalonia (ESMUC) since 2001 and founding member of the Spanish Tuba Quartet (STQ). He also works frequently as a visiting professor, giving lectures and recitals throughout Europe.

He has given numerous concerts around the world, touring in Spain, France, the United Kingdom, Germany, Italy, Austria, the Netherlands, Romania, the USA, Canada, Puerto Rico, Croatia, Slovenia, Denmark, Japan and China; performing in renowned concert halls such as Carnegie Hall (New York), The Concertgebouw (Amsterdam), the Musikverein (Vienna) or the Royal Albert Hall (London). In April 2001 he premiered the “Concerto for Tuba and Orchestra” by the composer Pere Josep Puértolas, during the season 2000-01 of the Barcelona Symphony Orquestra, under the direction of its principal conductor, Lawrence Foster.

Since 2010 Pablo Fernández is a Miraphone performing artist. He plays on a Miraphone F Tuba 481 “Elektra”.