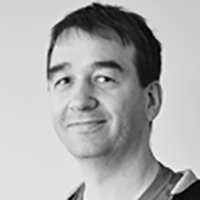 Kristian Lassen is ass. professor in piano, rotation and ensemble playing at The Royal Academy of Music, Aarhus. Through the years he has been a teacher at several music schools, at folkehøjskoler and at The Academy of Music, Aalborg. He has played in a large number of bands, Cordero Y Los Gran Daneses, Venter på Far, Mek Pek og Habbasutterne and Michael Learns to Rock a.m.o. In 2000 he started his own cuban ensemble Sexteto, in which he is the band leader.